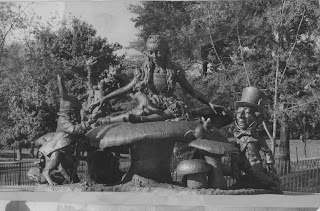 As Modern Art Foundry nears eighty years in the fine art casting business, we have been working with , at Modern Art Foundry full-time since 1955, to collect his stories and memories of his life working for artists. In this Newsletter we would like to share a conversation between Bob and Patricia Bradshaw regarding the Alice in Wonderland monument by Jose De Creeft located on the east side of Central Park, north of the Conservatory Water at 72nd Street.
Artist José De Creeft was born in Guadalajara, Spain in 1884. He moved to the in 1929 and became a citizen in 1940. He had a long and successful career as both sculptor and teacher. Mr. De Creeft died in in 1982.
The following is a summary of a conversation recorded in February 2011.
Today, let us talk about the in Wonderland sculpture located in .
De Creeft’s idea was that this monument needed to be very child friendly. The layout of the maquette had the statues and the composition so that children would be able to climb on the piece easily. Of course, it is dominated by sitting on the mushroom. is welcoming all to come up, sit with her, and look at the cat up in the little tree behind her with its silly grin. The mushrooms serve to support your climb up and allow you access to the sculpture.
Did the maquette come to the foundry full size?
We received the full size enlargement, which was created by the sculptors of that era who worked as professional enlargers. De Creeft supervised the enlargement and it was delivered to the foundry.
Did you do any of the finishing or patina on it?
Yes. I got out of the service in 1955, so by the time that job came into the foundry I was already working in the finishing room. I did not do all of it, but I did some. I do remember finishing the big mushroom. It was cast in sections, and some of the welding was done on the inside. There was not enough room inside of the bronze for me use the mask with the dark glasses to protect my eyes from being burned, so I held the glass without the hood and I tack welded it. Little did I know, that the ultra-violet light was bouncing off the top of the bronze and into my eyes. I went home that night and in the middle of the night, it felt like I had sand in my eyes. It hurt so much the next day that I went to have them checked by my doctor. What happened was, my retinas were burned and I suffered for many years after that with night driving because it would give me headaches.
Was it delivered in one piece?
Yes. We have a number of foundry pictures of the work in our yard. One with the whole foundry staff that we have published a few times. When it was finished Mr. Delacorte, Mrs. De Creeft, and a number of city officials visited the foundry for final acceptance. My father was the foundry president and presented the work to those visiting, my brother John was there too. It was craned on to a flat bed truck and traveled through the streets of . I think it went over the , down Second Avenue, then over to . Another crane was waiting there and they picked the whole thing up and sat it in place. We had prepared templates for the piece indicating where the pins would come out, holes were drilled into the concrete base, and it was dry fit to make sure it was ok. It was installed and we walked away. Later on, they had a ceremony. It has been there since and is a favorite spot for locals and tourists, and is a city sensation as far as I am concerned.
Do you remember any concerns about the public being able to climb on the work?
When the piece was completed, my job was to rub my hands all over the surface of the statue to check if there was anything sharp that somebody could scratch or cut themselves on. If anything was sharp – I had to matte it down. I actually touched every inch of the statue to make sure it was safe.
Any final thoughts?
It is obviously an historic and important part of ’s landscape. I believe Mr. De Creeft created a very successful public work and Modern Art Foundry has always been proud of having cast this work for him and the city.

MY LIFE INSIDE ART, Bob Spring's reflections on his fifty plus years of experiences in the art casting business, is being catalogued by Patricia Bradshaw.  Patricia is coordinating an on going collection process that includes interviews, journal writings, and recorded memories for publication in print, digital, and sound mediums. The above excerpt has been edited by Jeffrey Spring.
Posted by Modern Art Foundry at 12:03 PM No comments: 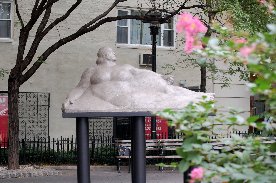 In Tramway Plaza - New York, New York
The Lachaise Foundation and the Frelinghuysen-Morris Foundation are pleased to announce the unveiling of La Montagne (The Mountain) modeled in 1934 by American Modernist sculptor Gaston Lachaise (1882-1935. The monumental
bronze earth goddess lies at the Tramway Plaza, located on Second Avenue between 59th and 60th Streets, where it is on loan to the New York City Parks Department from September 23rd until April 1st 2012.

La Montagne is the culmination of a series begun in 1913 by Lachaise in New York, where he lived and worked from 1912 until his death in 1935. The work represents at once a landscape and the figure of Isabel Dutaud Nagle, the artist's muse, model and eventual wife. Lachaise envisioned a piece that was "great and solemn." He later admitted, "You may say the model is my wife. It is a large, generous figure of great placidity, great tranquility." Some recognize in Lachaise a revival of the feminine ideal that had flourished for centuries in the voluptuous stone carvings on Hindu temples. Lachaise's wife inspired virtually all of Lachaise's sculptures of the female form. "You are the Goddess I seek to express in all my work," he wrote to her in 1915-16.

This bronze cast, the second in an edition of five, was made in 2002 by the Modern Art Foundry. Measuring eight and one half feet long, weighing two and a half tons, La Montagne embodies the artist's adoration of Woman in monumental form and heroic proportions. Its silver nitrate patina recalls the cement material of the original work, which George L. K. Morris commissioned in 1934 for his estate in Lenox, Massachusetts (now open to the public as the Frelinghuysen-Morris House and Studio).

Reclining beneath a canopy of honey locust trees at an angle between 59th Street and Second Avenue, La Montagne infuses the small park under the Roosevelt Island tram and its passersby with a dose of tranquility.  This veritable Mother Earth, mature and abstracted, looking East to the rising sun, offers a rewarding contemplation for people in motion. In a place defined by movement--cars, trams, people - La Montagne is at once a destination and a voyage.

E. E. Cummings once likened Lachaise's work to a "slow arrow of beauty
vigorously expressing something of a civilization of which speed seems to be
the god." Lincoln Kirstein, a friend of the artist's and a founder of the School of American Ballet, described La Montagne as "the balance of breathing sumptuousness, a mountain raised into air, earth sharing the shape of clouds." (MoMA Retrospective, 1935).

The Lachaise Foundation serves to promote, protect and perpetuate the work
of Gaston Lachaise for the public benefit.