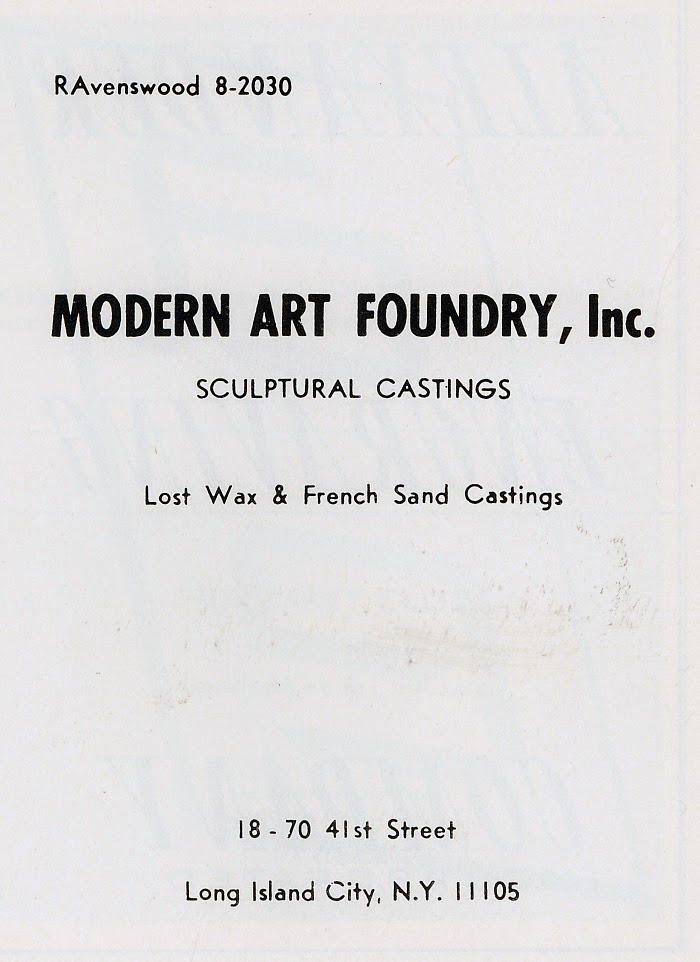 Posted by Modern Art Foundry at 7:57 AM No comments: 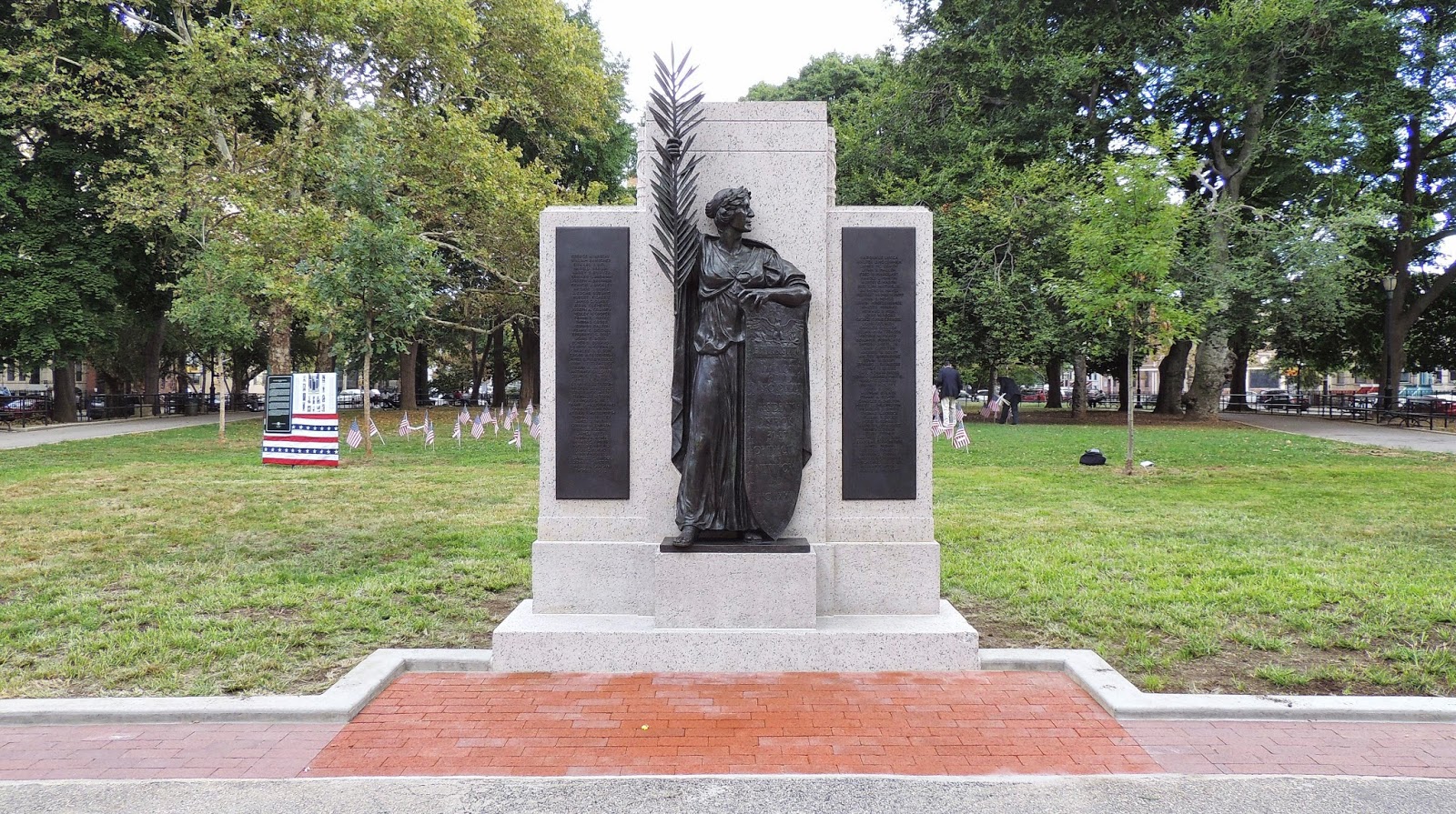 
In 1920, James S. J. Novelli, an Italian-American sculptor and prolific monument maker was commissioned to model a World War I monument for Saratoga Park in Brooklyn, NY. The Saratoga Monument consists of a granite plinth and two cast bronze honor rolls listing 106 local soldiers who died during the war that flank a life-size allegorical figure, also cast bronze. It is believed that in 1970, the two honor rolls went missing and in 2000 the figure was stolen. From that time until just a few weeks ago, the granite slab stood bare in Saratoga Park.

As part of a city parks restoration contract, working with Fina Gonzalez of WBE Unlimited Corporation, Modern Art Foundry hired professional  sculptor Anatoly S. Mikhailov to model a replica sculpture from photographs and the remaining bronze fragments of the original work. Anatoly has worked for us before, most recently modeling a life-size figure of George M. Steinbrenner III located in the main lobby of Yankee Stadium in the Bronx, NY, and a life-size Abraham Lincoln for a private collector. In addition to modeling and casting the Saratoga figure, the two honor rolls were also recast.

"It is almost always incredibly interesting and exciting to be part of restoring historically significant work. Using reference documents and images, you feel a sense of time travel as you set out to repeat what was once completed and presented to the public. The process from start to finish is very engaging."  ~ Jeffrey Spring

Posted by Modern Art Foundry at 11:36 AM No comments:

"On a recent visit to in , I happened upon Max Ernst's marker and was reminded of the thread some artists have made through the three generations of Modern Art Foundry. It has been in these relationships that our commitment and contribution to those who make art has been made." ~ 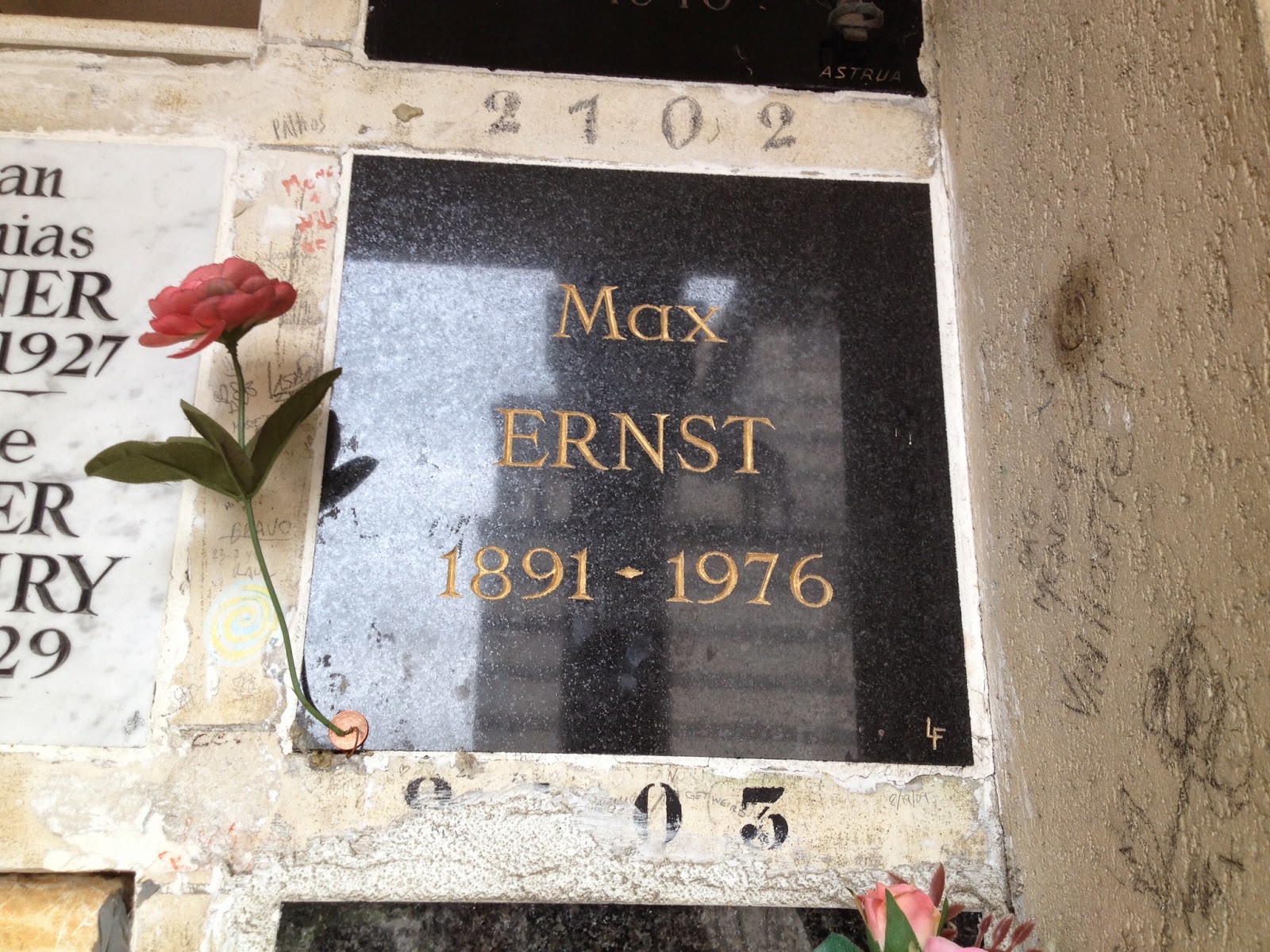 Max Ernst was a painter, sculptor, graphic artist, and poet. He is often considered one of the pioneers of the Dada and Surrealism movements. His work "The King Playing with the Queen," was one of the featured works at the Mnuchin Gallery’s exhibition titled, Casting Modernity: Bronze in The XXth Century, that was cast at the foundry.

Modern Art Foundry has an extensive casting history with Max Ernst, lifetime and posthumously. He worked with John and , and his family has worked with Bob and . “Our records indicate that Mr. Ernst first brought work to us in 1953. I returned from the Air Force in 1955 and I remember Mr. Ernst and his gallery at that time. I have always enjoyed Max Ernst’s sculptures.” ~

Prepared by Patricia Bradshaw as part of:
~: MY LIFE INSIDE ART~
Reflections on fifty plus years in the fine art casting business.
An on-going collection process that includes interviews, writings, and recordings for publication in print, digital, and sound mediums.


~~ Photo Credits on File
Posted by Modern Art Foundry at 12:22 PM No comments: 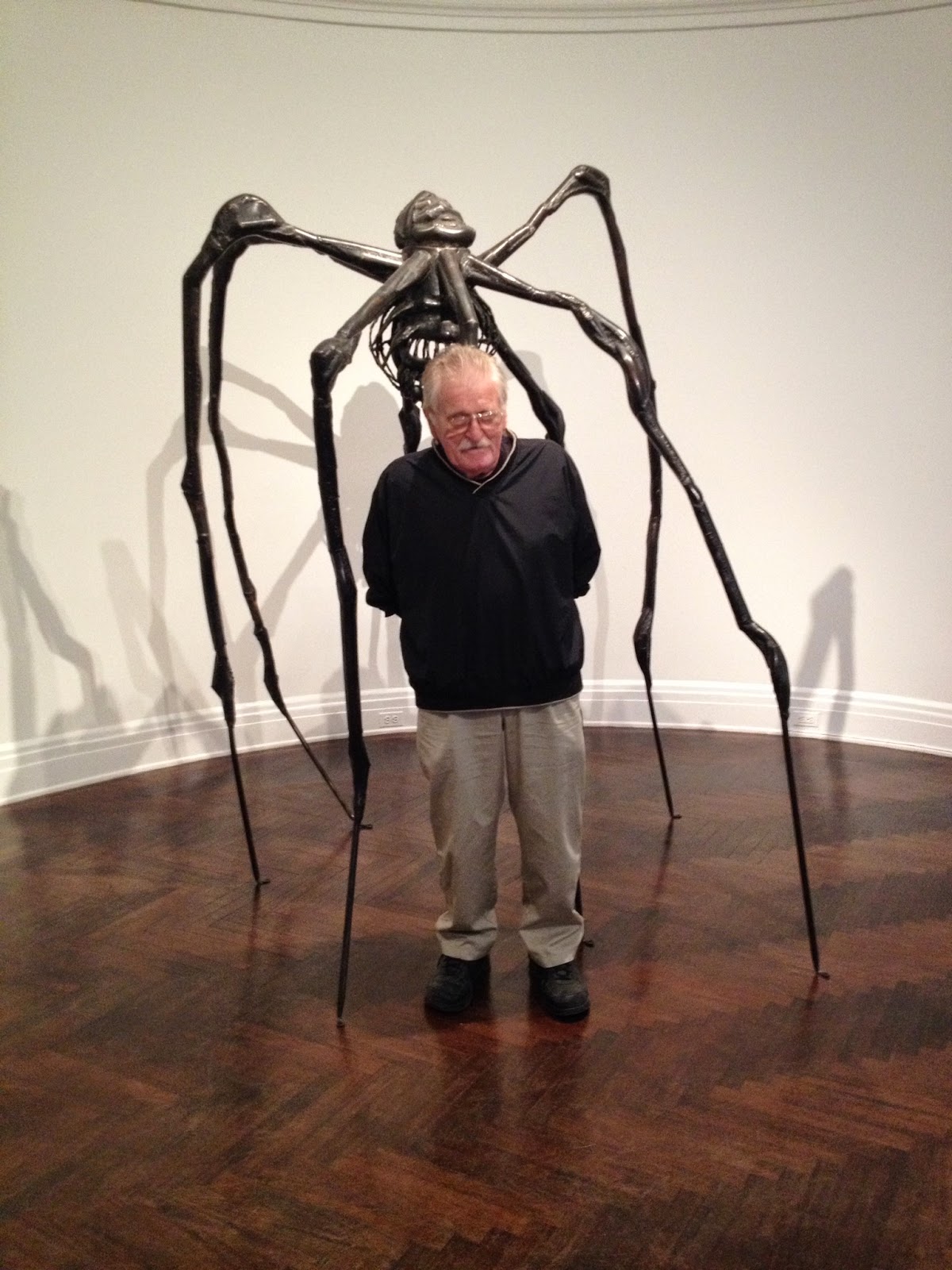 Introduction to a Series of Discussions with

A few days before its closing in June 2014, Bob and made their way to in NYC to visit the exhibition titled, Casting Modernity: Bronze in the XXth Century at the Mnuchin Gallery. After reviewing promotional materials and recognizing a number of castings made at Modern Art Foundry, Jeffrey wanted his father Bob to see this show.

- - - "In a very simple way, the exhibition unknowingly shared our history too," Jeffrey remarked.

Upon their return, I met with Mr. Spring a couple times to discuss his thoughts on the exhibition. He said he was quite taken seeing all these works, and felt a clear emotional connection. Many of these artist’s he worked with directly, providing services to assist them in their artistic pursuits. He added, "It was a nice tribute to the foundry, although most people, on first glance would not know we were involved. Even the artist’s we didn't cast for, their works sometimes made their way to our foundry when collectors need our conservation and maintenance services.” I asked Mr. Spring for some specific memories but his first thoughts mused about his father, himself, and now his daughter and son all sharing these similar experiences working with artists.

- - - He replied, “It was very nice of the gallery curator to show us around, and give us two complimentary exhibition catalogues.”

The artist’s included in the exhibit were Jean Arp, Louise Bourgeois, Constantin Brancusi, Alexander Calder, Willem de Kooning, Max Ernst, Alberto Giacomettti, Jasper Johns, Jeff Koons, Henri Laurens, Roy Lichtenstein, Marino Marini, Henri Matisse, Joan Miro, Henry Moore, Bruce Nauman, Isamu Noguchi, Pablo Picasso, Germaine Richier, Auguste Rodin, David Smith, and Cy Twombly. Mr. Spring recalled, "My father always told me that our purpose is to be faithful to the artists intentions. We are not critics. This principle has allowed us to work with many, many artists during the past eighty two years. We are certainly not perfect, but it is important for foundries to have good craftsman, without them you would not meet the demands of the customers."

In the next few posts I will expand on Mr. Spring’s memories and connections in more detail including working with sculptors Louise Bourgeois, Willem de Kooning, Max Ernst, Jasper Johns, Isamu Noguchi and others.

Posted by Modern Art Foundry at 7:44 AM No comments:

In 1978 when Greg received a commission to sculpt a monumental eagle for International Headquarters of the American Bureau of Shipping in NYC. Greg chose Modern Art Foundry to make the cast. At that time, we also completed works for his exhibition at Bodley Gallery. We are pleased to have had an ongoing relationship with Greg for over thirty years, and reestablished our working relationship about six years ago, including the casting his work "Luna," the Roman goddess, for this show.

The Romans venerated "Luna" as goddess of the moon and a patron of the feminine. She was believed to inspire love and hold control over imagination through dreams. "Luna" was the deity who lifted the subconscious from its cloudy realms and brought its instinctual awareness and insight into the knowable and eternal present. 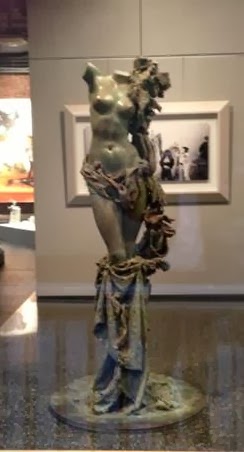 The on line ARTFIXdaily describes Greg's presentation as "an allegorical figure created with exacting attention to detail, a lyrical composition, a carefully burnished patina, and a work of art inspired by the mastery of Renaissance sculptors and inflected with a contemporary sensibility". It continues, "with her torso and legs draped in a cascading garment that suggest her close connection with the tug and pull of the moon's effect on the earth's waters".

Among the worlds preeminent sculptors working in cast bronze, Greg is well known for his public monuments including "Peace Fountain" at the Cathedral Church, and "Price of Freedom" at Arlington National Cemetery, VA to name just two of the many commissioned works on view around the globe, including at the Shakespeare Birthplace Trust, England and Perking University, China.

We encourage you to attend the show at The Gallatin Galleries and learn more about Greg Wyatt and all the faculty members. For more information visit:

Posted by Modern Art Foundry at 11:30 AM No comments: